On the status model, rather, it means a politics aimed at overcoming subordination by establishing the misrecognized party as a full member of society, capable of participating on a par with other members. To apply the status model requires examining institutionalized patterns of cultural value for their effects on the relative standing of social actors. If and when such patterns constitute actors as peers , capable of participating on a par with one another in social life, then we can speak of reciprocal recognition and status equality. When, in contrast, institutionalized patterns of cultural value constitute some actors as inferior, excluded, wholly other, or simply invisible, hence as less than full partners in social interaction, then we must speak of misrecognition and status subordination.

On the status model, therefore, misrecognition is a social relation of subordination relayed through institutionalized patterns of cultural value. It occurs when social institutions regulate interaction according to cultural norms that impede parity of participation. In each of these cases, interaction is regulated by an institutionalized pattern of cultural value that constitutes some categories of social actors as normative and others as deficient or inferior.

In each case, the result is to deny some members of society the status of full partners in interaction, capable of participating on a par with the rest.


On the status model, then, misrecognition constitutes a serious violation of justice. Wherever and however it occurs, a claim for recognition is in order.

But note precisely what this means: aimed not at valorizing group identity, but rather at overcoming subordination, claims for recognition seek to establish the subordinated party as a full partner in social life, able to interact with others as a peer. They aim, that is, to deinstitutionalize patterns of cultural value that impede parity of participation and to replace them with patterns that foster it. The status model of recognition constitutes a resource against reification in globalization. Focused not on group identity, but on the effects of institutionalized norms on capacities for interaction, it avoids hypostatizing culture and substituting identity engineering for social change.

Likewise, by refusing to privilege remedies for misrecognition that valorize existing group identities, it avoids essentializing current configurations and foreclosing historical change. Finally, by establishing participatory parity as a normative standard, the status model submits claims for recognition to democratic processes of public justification. Thus, it avoids the authoritarian monologism of the politics of authenticity; and it valorizes transcultural interaction, as opposed to separatism and group enclaving.

Far from encouraging repressive communitarianism, then, the status model militates against it. In general, then, this approach fosters the sort of politics of recognition that is needed, if we treat globalization neither as fatality nor as utopia but as a context for social-justice struggles.

Like displacement and reification, this one, too, is the result of an historical irony: globalization is decentering the national frame in ways that make it increasingly implausible to posit the national state as the sole container, arena, and regulator of social justice. Under these conditions, it is imperative to pose questions at the right level: one must determine which matters are genuinely national, which local, which regional, and which global. Yet current conflicts often assume an inappropriate frame. For example, numerous movements are seeking to secure ethnic enclaves at precisely the moment when increased mixing of populations is rendering such projects utopian.

And some defenders of redistribution are turning protectionist at precisely the moment when economic globalization is making Keynesianism in one country an impossibility. In such cases, the effect is not to promote parity of participation. It is rather to exacerbate disparities by forcibly imposing a national frame on processes that are inherently transnational. I have called this the problem of misframing.

Like displacement and reification, misframing threatens our ability to envision social justice in globalization. To defuse this threat, we need to revisit the problem of the frame. What is needed is a multi-tiered conception that decenters the national frame. Only such a conception can accommodate the full range of social processes that create disparities of participation in globalization. The need for a multi-tiered conception arises because of mismatches of scale. For example, many of the economic processes governing distribution are clearly transnational.

Yet the redistributive mechanisms we inherit from the fordist period are national in scale. 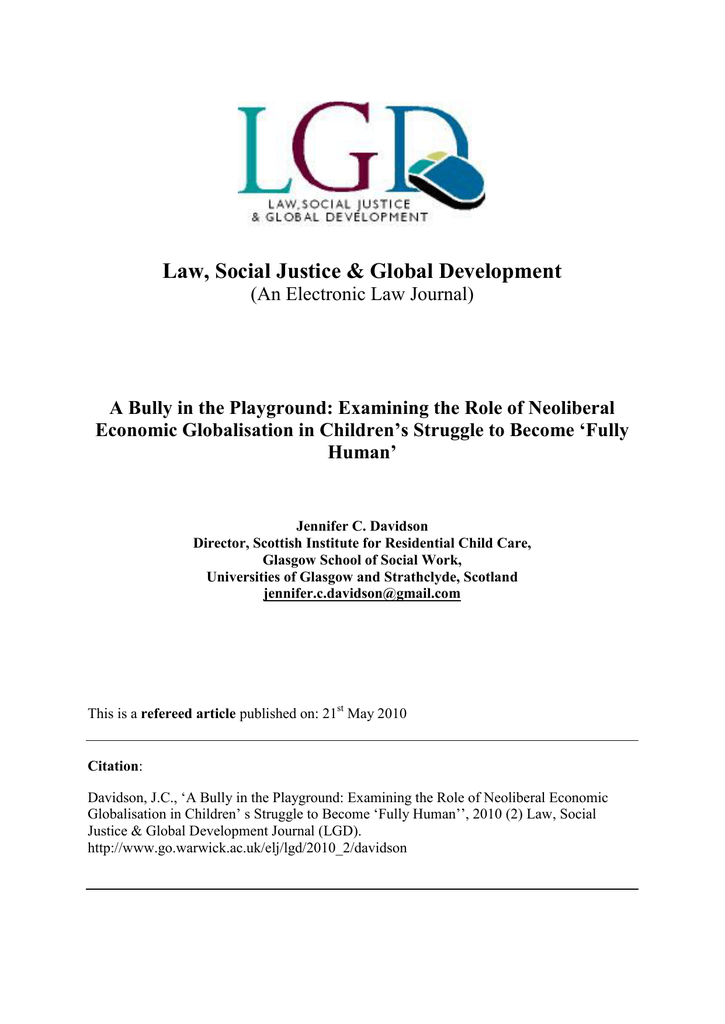 Thus, there is a clear mismatch at present between them. Granted, transnational institutions such as the European Union promise to help close the gap. But they too suffer from severe justice deficits, both internal in their neoliberal proclivities and external in their tendency to erect Fortress Europe.

Apart from scattered campaigns for a Tobin Tax and an unconditional Universal Basic Income, there has been little on the horizon until recently that promises to overcome this mismatch of scale. Recently, however, some strands of the emerging movement against the hegemonic neoliberal form of globalization have begun to think seriously about this issue. With further development in this direction, the World Social Forum could help to generate programmatic ideas as well as political energies. Likewise, many of the cultural processes that generate distinctions of status are not confinable within a national frame, as they include global flows of signs and images, on the one hand, and local practices of hybridization and appropriation, on the other.

Yet the mechanisms for redressing status subordination, too, are largely housed within countries or, as we used to call them, nation-states.

The Grand Challenges for Social Work

Thus, here too, we encounter a mismatch. Granted, emerging new transnational mechanisms for institutionalizing human rights, such as the International Criminal Court, hold out some promise for closing this gap. But they remain rudimentary and subject to pressure from powerful states. In any case, such organizations are probably too global, and too oriented to abstract universals, to deal with all forms of status subordination.

Globalisation and the environment

In general, there is no one frame that fits all issues of justice in globalization. As we saw, justice here means removal of impediments to parity of participation. Yet, as we also saw, there are at least two different types of impediment, maldistribution and misrecognition, which do not map neatly onto one another. Thus, there is no guarantee that a frame appropriate to one dimension of justice will also befit the other. On the contrary, there are many cases in which reforms framed from one perspective end up exacerbating injustice in the other.

As a result, the question of when and where to apply which frame becomes unavoidable. Henceforth, every discussion about justice must incorporate an explicit reflection on the problem of the frame. For every issue, we must ask: who precisely are the relevant subjects of justice? Who are the social actors among whom parity of participation is required? Earlier, before the current acceleration of globalization, the answers to such questions were largely taken for granted. It was assumed, usually without explicit discussion, that spheres of justice were coextensive with states, hence that those entitled to consideration were fellow citizens.

Today, however, that answer can no longer go without saying. Given the increased salience of both transnational and subnational processes, the country can no longer serve as the sole unit or container of justice. Have you read this? Please log in to set a read status Setting a reading intention helps you organise your reading. Read the guide.

It makes it easy to scan through your lists and keep track of progress.